In different shapes and sizes they came

Monday morning isn’t exactly the highlight of my week. Most times, the first thing that comes to mind is my timesheet at the office, and all the jobs waiting for me. As I get out of bed it hits me full blast, with my legs in mid-air: five more mornings of the trotro experience. Perfect way to start the week.

After a few stampedes at Bridge, we’re on our way, bodies contorted this way and that, seated with various degrees of (dis)comfort in one of the two types of trotros that ply my work route: the Nissan Urvan and the Benz 207. 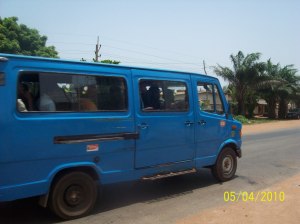 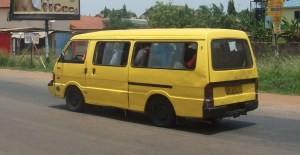 In either bus, the seats, I’ll say, are very unfriendly to anyone above six feet. No matter how many rows there are, there’s never enough leg room. I’m actually so used to my knees scraping the dirty seat in front of me well well, that I don’t mind that much these days. Either that or I twist myself and bear sharp pain in my back the whole journey. Yeah, that takes up more than the space I paid for, and endure a few looks of disdain (first at my legs taking space, then at my face), but I just turn away with a look that says, “You don’t wanna mess with this brother!” The Urvan’s first row is only slightly better, though I still have to put my feet up on that metal just behind the driver’s seat and front seats, with curled up knees, almost to my chest. Every now and then, however, the mate decides to send us back into the dark ages and brings in an extra passenger, making us four in the row. So much for comfort. Back in the day, I wonder how we managed four on a seat. I mean, here I was, sat next to ‘syto’ school children eating beans or waakye straight from the rubber, sitting on top of each other so they pay only one fare, and making a complete nuisance of themselves. Then there are two artisans with their heavy tools in sacks, all on one seat that slips off and into the metal frame with each sudden stop. All this time my knees are mashed against the seat in front, and we’re all supposed to be grateful just to have got a ride? You can’t imagine my amazement when the other day someone in a 207 had her legs stretched out next to me with all the leg room of Emirates Business Class.

So how about escaping to the front seat next to the driver? In the Urvan, yes, there’s more leg room, and two on the seat, and you can ‘twaa seven’ (I think in English that would be sticking your elbow out of the window like you’re the car owner). But I only realized that you actually sit smack on the engine when the engine overheated one day? On that day it occurred to me that the ripped cushion offered little insulation. As if the bus isn’t hot and stuffy enough. As for the 207, the front seat may not be on the engine, but the gear is so close to the person sitting closest to it that you get a hit on the knee every time the driver moves into third! Don’t expect any apologies. If you have white trousers on that day, nawa for you oo…

So we’re stuffed in the Urvan like ‘fose’ bale, going along the streets of Accra. For sanity’s sake, I’ve blocked out my surroundings, engrossed in a book. The bus stops suddenly and I’m jolted back to reality with the falling off of the sliding door, the ‘gate’, as they call it, because that’s exactly what it is. Yes, the one that’s either got the seat belt or some flimsy drying line rope tied to it to secure it. I guess they can’t just let the thing slide on its own because it’s never greased enough. Anyway, that rope isn’t enough to keep that rusted thing in place. Imagine being in the front row, right next to the mate, and he’s struggling to keep this gate in place throughout the journey, because it keeps falling out like a dislocated shoulder. And all this while he’s sold his seat to a third passenger! Then there’s the other extreme, where no amount of banging can shut that hunk of metal. Mind you, this applies to both bus types. Once again, we just sigh to ourselves, enduring the noise as the mate continues in his battle of man versus gate, gate obviously winning. After a while, Bro. Mate whips out a stained bandana and ties the gate to the bus’s frame, very pleased with his ingenious solution. We’re in traffic and a few metres away from Ridge. The mate, after his morning exertions, is catching some sleep next to me, his head bobbing like a yo-yo. I guess this is just my cue to spring my escape and flee from all the drama.

That’s not to say all rides are unpleasant, but the trotro is a functional mode of transport that gets you from A to B. Period. It’s stripped, literally, of all comfort. Anything extra (like padding on the doors) is sold to spare parts dealers. It’s an experience to tolerate or endure till you bid it goodbye, and start the cycle again tomorrow.

I’m dying to hear what interesting experiences you’ve got from Urvans and 207s in your time.  Keep them coming!

By day, I'm an advertising copywriter. That's what I've done all my working life (National Service doesn't count). Husband of Esther, father of Jesse and twin boys Mark and Andrew, and servant of Christ. I previously wrote a blog on the dramatic side of public transport in Accra, "The Daily Commute: From Bridge to Ridge." Enjoy.
View all posts by Kwaku Dankwa →
This entry was posted in Tales from a trotro. Bookmark the permalink.

40 Responses to In different shapes and sizes they came